Last week I gave a talk to Museum Studies students at my school about the perceived and actual differences between academic and public historians as a way of introducing my course in the spring, The Practice of Public History. During my talk, to a fantastic group, I covered a wide range of topics and ideas, partly driven by my impressions of the implications of recent reports that revealed history-related institutions make up more than half of all museums, yet account for less than a fifth of the total financial resources devoted to cultural and heritage organizations.  I also talked about the importance of evaluating programs and establishing a clear definition of success that included a discussion about fitting different modes of interpretation (first-person costumed, third-person, tech-driven, etc.) to one’s ostensible purpose.  That’s because when done well, first-person interpretation, complete with buckled shoes and frilly shirts, can be a powerful tool of public history, reaching and impacting more people, and shaping their understanding of the past, than might ever read the books written by Bernard Bailyn, Gordon Wood, Pauline Maier, and Jack Greene (my own mentor), combined.  Conversely, when done poorly, when the facts aren’t straight and the persona is off, it can create enormous damage to an observer’s historical consciousness, and drive more dismissal of the tactic, even of the entire field, by “proper” historians, whether they lecture in an august classroom or muse in a comfortable armchair. 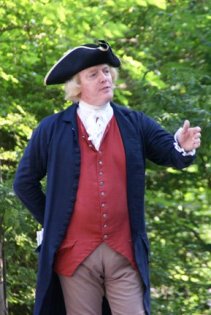 The example I used of first-person interpretation at its best was Bill Barker, who portrays one of the more difficult–because tremendously complicated–historical figures, Thomas Jefferson, at Colonial Williamsburg, Monticello, and elsewhere.  As I know quite well, having once been his neighbor and chief annoyance at CW (which almost resulted in the burning down of an historic structure, but that’s a different story), Bill is not only an expert on his subject on a level at, or even greater than, many Jefferson historians of my acquaintance, he also knows what that ill-defined, undifferentiated mass we call the “public” expects from him as Jefferson, complexities and all.  And he does a tremendously good job of bridging the exceptionally problematic gap between Jeffersonian fiction and fact, which is saying quite something because there is quite a bit of the former and nowhere near enough of the latter when it comes to the tall Virginia redhead.  Bill knows his craft and the impact it has on his audience, whether they have met him for the first or hundredth time, and he takes that responsibility with the utmost seriousness.  That’s because he is fully aware of the trust he assumes whenever he takes on the persona of Jefferson; he has the power to inspire and engage, but along with that comes the potential to disappoint and derail. 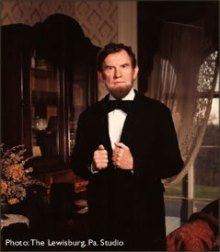 I wasn’t thinking of Bill, though, when I actually got up to talk last week.  I was thinking about another interpreter of an American president, one perhaps not as well-traveled as Bill, but one just as professional and every bit as influential, and who I, sitting there in a Harvard lecture hall, had just been informed by my niece had passed away at the age of 83: James Getty.  For almost 40 years, Getty portrayed Abraham Lincoln in Gettysburg, Pennsylvania, for much of that time at his studio on Steinwehr Avenue, “A. Lincoln’s Place.”  And it was there, on the evening of September 27, 1978, that an eight-year-old from Baltimore, who before then had spent more time on horseback than in a library, became an historian.  To avoid the risk of turning this post into a maudlin personal memoir (“too late,” you might say), I’ll just relate that my parents and grandparents, wanting to nurture my nascent interest in the past, arranged a “private audience” for me with Getty as Mr. Lincoln.  And for a time, I was enthralled by his kindness and his knowledge.  For an hour or so, 1978 turned into 1863 and there was no one 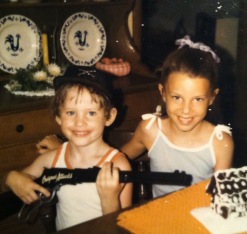 else in the world but me and the 16th President of the United States, with my family playing the role of an indulgent audience to what must have seemed an odd discussion between a blonde-haired, blue-eyed boy in a striped shirt and a tall man with a black beard and a stovepipe hat.  I was never the same after that evening.  I devoured works on Lincoln and the Civil War, returned countless times to Gettysburg and other battlefields, and then moved on to study the American Revolution and the ideas behind what happened “Four score and seven years” before my ostensible meeting with Mr. Lincoln.  I also continued to carry with me the tremendous gift that he had given me, of being able to suspend one’s disbelief to become, even briefly, a time traveler, and thereby, as an historian, better grasp the perspective of people I’ll never really know but can attempt to understand on their own terms, as people in their own world, one much different, in many but not all ways, from our own.

And that, in a nutshell, is the power of the first-person interpreter, and also the responsibility that accompanies it should a public history 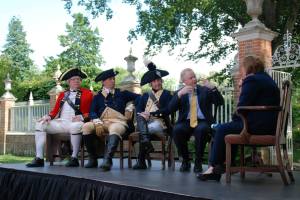 program developer or individual interpreter choose to take on such a role.  The clothes do not make the historical man or woman.  As I became more educated about Lincoln, I became more impressed over time with what I remembered about James Getty’s portrayal and how much he got right.  I also recognized what I do not remember: Whether his boots were the right cut or his buttons the right size.  What was more important, and just as Bill Barker accomplishes as Jefferson every day, James Getty created an authentic historical moment as Lincoln, even for one otherwise unremarkable little boy.

In that sense, costumed portrayals, whether as a famous or forgotten person of the past, come with a high cost in terms of education and training about both the subject and, critically, the ethics of it.  I personally tutored CW’s James Madison (the splendid Bryan Austin) for several grueling months before we let him interact with guests, because we knew what could happen when the first-person experience goes awry, in turning off guests or, worse, miseducating them about the past.  And that is perhaps more important today, when candidates and pontificators increasingly attempt to use history as a tool to further their own political or ideological causes.  The people, therefore, need to be forearmed with their own knowledge about the past, if, for no other reason, to use as a shield against those who would attempt to take advantage of ignorance to influence behavior.

And, on a much more personal note, had not James Getty accepted his calling with such alacrity and integrity, Harvard Yard would be home to one fewer historian today, which would be a shame, indeed.

3 thoughts on “Beyond the Suspension of Disbelief: James Getty and the Power of the First-Person Interpreter”

Life one door at a time